The first image below shows an array of cross-linked polyethylene piping laid down on a metal mesh before concrete is poured to establish the surface of a concrete road. The road is also used for solar heat collection in summer. 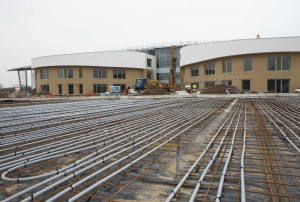 An array of PEX piping - concrete solar road in construction

The next image shows the completed concrete solar collector which acts as the bus turning area and drop off point for a sixth form college. The concrete surface has been painted black to enhance its heat collection properties.

Solar heat is collected in summer from the surface heat generated by solar radiation. The heat is transferred to ThermalBanks in the ground over the summer and released into the building in winter with an adapted ground source heat pump to heat the building without burning fossil fuels.

The system can also be used for snow clearance. 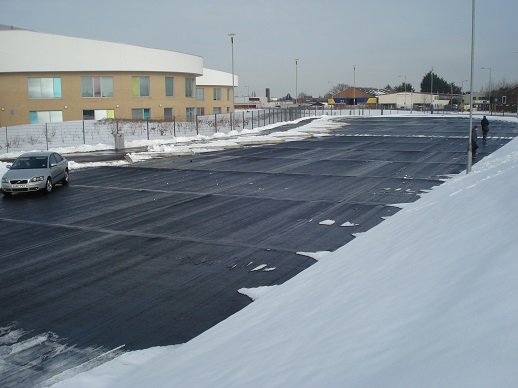 The bus turning area cleared of snow by ICAX Solar Road Systems at Suffolk One - February 2012.

The bus turning area has been given a second function: collection of solar energy in summer.

The bus turning area has been given a third function: release of heat to melt snow and ice in winter.

This is the same area as a concrete aircraft parking stand beneath a jumbo jet at Heathrow Airport.

Similar techniques have been used to construct asphalt solar collectors and to recycle this heat through thermalbanks to provide ground source heating.

It is also possible to provide ground source cooling in summer by allowing the heat within a building to be transferred down to cold thermalbanks in the ground: this release of heat to the ground in summer is cheaper than heat exchanging with hot air. It also allows build up of temperature in the thermalbank so that ground source heating can be provided more cheaply in the following winter.